Isn't Jim Bradley, the pompous Peterson environment minister who always huffed and puffed about conservation, about cutting down on energy use, etc., now hypocritically wasting energy in his own ministry? Is this why Jim Bradley's Liberals now want to build more nuclear plants in Ontario without full environmental assessments, because Jim can't FLICK OFF the lights on his own highways?

I wonder how many smog-related deaths can be attributed to these lights being left on, and to the coal-fired generators, run by Bradley's Liberals, which helped generate that power?

Back in his opposition days, reporters were fooled into thinking that Jim Bradley would actually do something about his smug complaints. Ian Urquhart of the Toronto Star actually predicted Peterson-era dinosaur environment minister Bradley would be McGuinty's energy minister: "Bradley... will have credibility as he explains why the coal-fired plants are still spewing out pollution while the government searches for alternatives," wrote Urquart.

Credibilty - Jim Bradley?! Why, the McGuinty government lied about closing down all the coal stations! Bradley, nor McGuinty have any credibility whatsoever. The coal-fired plants ARE STILL "SPEWING OUT POLLUTION" - while McGuinty's government "searches for alternatives"! And they've been searching for five years now! Good call, Ian. How about writing a follow-up on that?

In opposition Bradley once smugly proclaimed: "This is a very embarrassing day for Ontario," (Niagara Falls Review, May.2, 2003) when Americans were complaining about the pollution wafting towards them from Ontario. Yet, strangely, Bradley isn't embarrassed now, when after five years of Liberal rule, nothing has changed regarding his Liberal-run coal plants!

Bradley agitated that Nanticoke should be converted to gas, in a Welland Tribune story (Jun.28, 2000) frighteningly titled "Smog expected to kill 85 in Niagara this year": "Bradley said the government needs to reinvest in public transportation, and create programs that will reduce ground-level smog emissions from cars and convert coal-fired plants, such as Nanticoke, which is west of Hamilton, to natural gas."

Well, it is now June, 2008 - have Bradley and his Liberals done that? Strangely, now the media don't seem to report how many are expected to die from smog in Niagara under Jim Bradley's government this year. This information is mainly useful only when Jim is in opposition, you see.

"Bradley said it was "somewhat embarrassing" that Ontario once pressured the U.S. to take action on pollutants and emissions. "Now, in New York state, their rules are tougher for coal-fired plants than in Ontario."
On Monday, he raised the issue in the provincial legislature, but said he wasn't satisfied with the response from Dan Newman, environment minister.
The minister said Monday he'd put a moratorium on coal-fired generation plants in the province, which was a "positive step forward."
"He doesn't answer the question, because he doesn't know the answer," said Bradley, the Liberal environment critic. "It says nothing about how the plants are operating."
Bradley said emissions from plants such as Nanticoke causes acid rain, lake pollution, agriculture damage and harms human health.
The Ontario Medical Association has estimated 1,800 premature deaths per year are caused by smog in Ontario, said Bradley. "Nanticoke is a major plant and a major source.""

So what has changed now, in 2008? Isn't Nanticoke still "a major plant" and still "a major source"? Bradley or his government don't have any 'answers' themselves, running blindly from one energy plan to the next. Bradley won't answer how many thousands of smog-related deaths have occurred in Ontario since his Liberals took over in 2003 - but according to Jim Bradley's own citations (when he was a smug, finger-pointing, power-hungry opposition member) then probably 10,000 Ontarians have prematurely died under McGuinty's Liberal government since 2003.

Yet Jim Bradley's Liberals have done nothing to even install scrubbers on Nanticoke to help prevent that. Shameful.

Liberals: their lights are on all day, but no one's home. 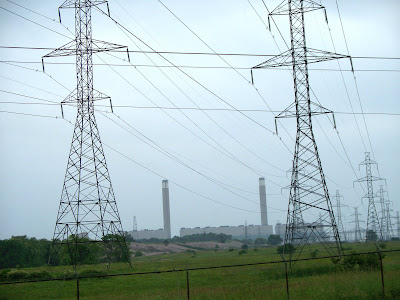 Above: The Ontario government's Nanticoke coal-fired generating station on the shore of Lake Erie, just east of Port Dover, on a grey Jun.29, 2008.