Crystal Beach, Then and Now: The Comet

I found myself today, on this sunny, breezy Saturday, on the sandy shore of beautiful Lake Erie at Crystal Beach, Ont., at a spot that I had last visited perhaps some 15 or more years ago.
Enough cannot be said of the magic that was old Crystal Beach. The great beach with its wide, sand-rippled shallows was a summertime memory for millions of visitors over the years. The shops along Derby Rd. teemed with people. Who can’t remember their famous suckers, and waffles, and Crystal Beach Loganberry Juice?!
Of course, the big attraction was the Crystal Beach amusement park, and its star roller coasters, the Comet, and the Giant (or Yellow) Coaster.
I looked in awe at how things had changed since I had last been here.
Standing on the east side of the now-former amusement park site (it closed in 1989), I looked west towards where the Comet had once stood, its tracks hugging the very edge of the break-wall at the water’s edge. Here once roared a summertime’s worth of collective excited screams from countless daring thrill-seekers.
Today, the view was serenely quiet, with only the seagulls chattering above a row of new waterfront homes which have since sprouted like sentinels on the Comet’s former site. In fact, the whole former park grounds have been developed into a gated subdivision. The once-bustling commercial areas of Erie Rd. and Derby Rd. were today virtually empty of traffic.
I took photos the last time I was at the old Crystal Beach amusement park, when it was being demolished, in Oct. 1990. The Comet is shown with a crane visible at its west end, and only the east end of the coaster was still standing.
I recall how eerie and quiet it was then on the shore of Lake Erie, with this once-vibrant park completely empty as I walked through it; with its vibrant, brightly-painted deco facades laying partially-demolished in the middle of the midway.
I was witnessing the quiet end of another era that day.
Here are some of my memories of how Crystal Beach Park had looked as I saw it on its very last days, prior to its disappearance forever.
*
below: St.Catharines Standard report, Oct.2,1990 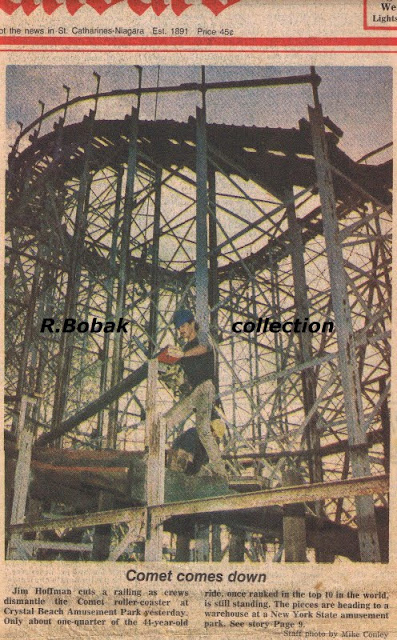 Below: The Comet shown being taken down, view looking westward. The break-wall and water of Lake Erie can be seen at the left. Note that in the left distance, the western half of the roller coaster has already been disassembled: a crane is working its way towards removing the eastern end of the coaster.
The Comet is still alive, having been bought in 1989 at auction for $210,000 and rebuilt in the winter of 1993-94 at an amusement park in Lake George, New York. Photos taken by R. Bobak, Oct. 1990. 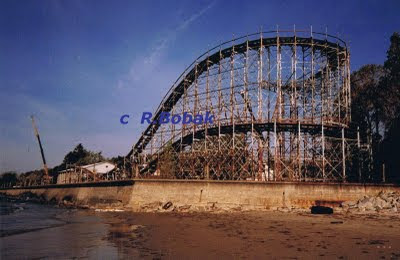 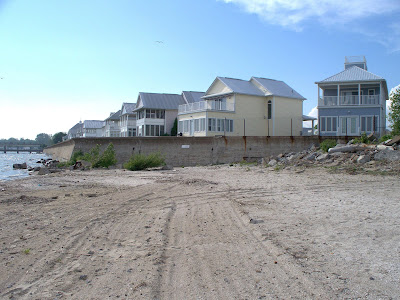 Above: Same view on Jun.14, 2008 ... a new lakeside gated community has risen on the site of the former amusement park, with the same breakwall along the Lake Erie shore.
*
Below: The geometric, colourful facade of the Arcade building, with its pylon sign towering over the midway. Photo by R. Bobak, Oct.1990. 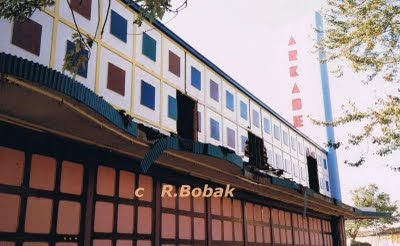 Below: The exuberant form and flow of the canopied entrance to the Giant Coaster (also known as the yellow coaster) is a classic of midway vernacular. The pink, curving massive marquee; the flagpoles; the turquoise-edged descending discs over the round pillars - classic!! Photos taken by R. Bobak, Oct. 1990. 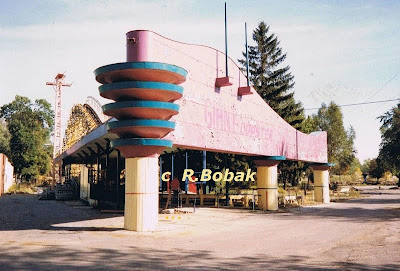 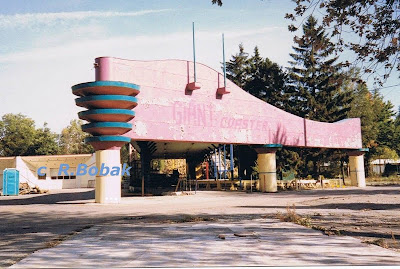 Below: The vivid-red painted facade of the Laff In The Dark ride. Photos by R. Bobak, Oct. 1990. 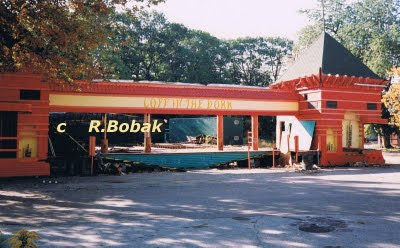 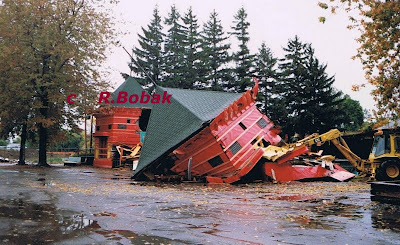 Above: The Laff In The Dark facade toppled over and being demolished. The above sad picture I took became my last memory of Crystal Beach Park.
*
Below: Crystal Beach along Derby Rd., as seen Jun.14, 2008. 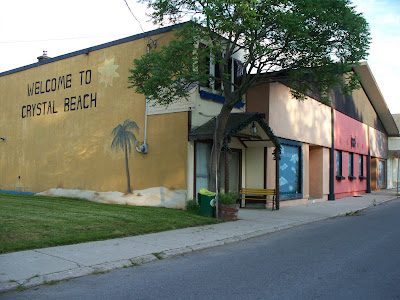 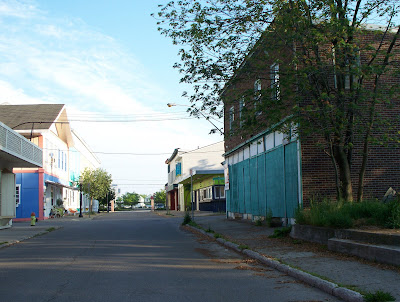 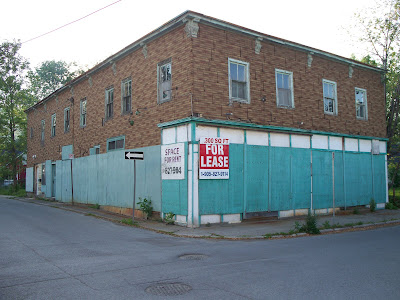 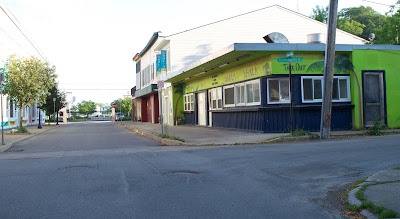 Above: These now-quiet streets, just north of the park, were once a commercial tourist hub, teeming with park and beach visitors. View is looking south towards Lake Erie in the distance, down Derby Rd. towards the new gated-community's fence and gate along Erie Rd. at the upper left. This had been one of the park's entrances.
*
Posted by R.Bobak at 11:10 PM

I remember Crystal Beach as well. Lot of wonderful memories.It's really too bad that it has turned into a ghost town since then.
Susan