Niagara Falls Then and Now: Rosbergs 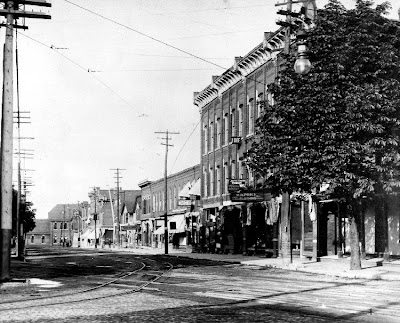 above: looking at north-east corner of Erie Ave. and Queen St. in 1907. The block of buildings at the near right would become amalgamated into the Rosberg's department store. Note streetcar tracks (starting at far left (west) of photo) turning corner from Queen St. onto Erie Ave. - where they also cross a set of Michigan Central railway tracks! The tracks are shown coming from the bottom right of photo and going along Erie Ave. at a north-west angle; the tracks quickly veered off to the west (left) halfway down the block (between Queen St. and Park St.), then continued N/W and crossed Park St. just west of Erie Ave., then they went west parallel to Park St. (in behind houses) The tracks continued west, (between Park St. and Bridge St.) crossing Crysler Ave., passing in front of houses along Park St. and continuing north-west where it crossed the intersection of Bridge St. and Victoria Ave. at a 45 degree angle. The Michigan Central had a station on the south-east corner of Erie St. and Queen St., just to the right of where the above photo was taken, and where the tracks in the foreground are coming from. At the far end of Erie St. in the photo above can be seen the Niagara Falls CN railway station, which sits parallel to Bridge St. in the distance. This same CN station building is still in service. 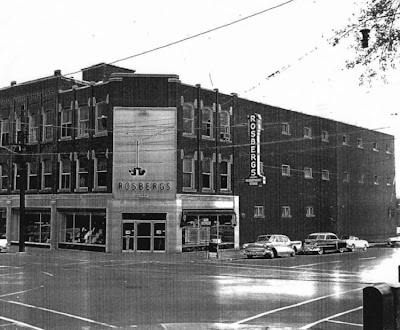 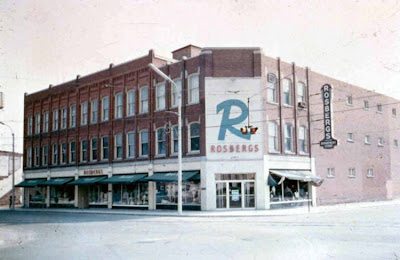 Above: Rosbergs in May 1965 before exterior renovation. (NFLA) 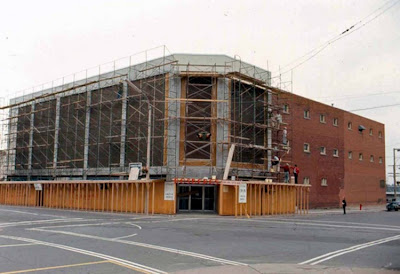 above: same corner; Rosbergs Department Store under renovation, date unknown (must be pre-Sept. 1977, though; see photo further below after reno) Photo from NFLA . Note tracks are still seen in front of Rosbergs along Erie Ave. in older photos. 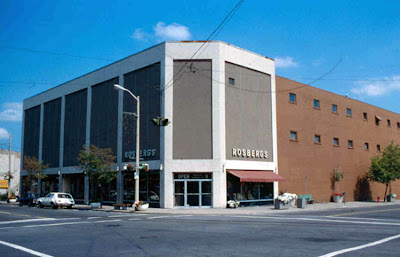 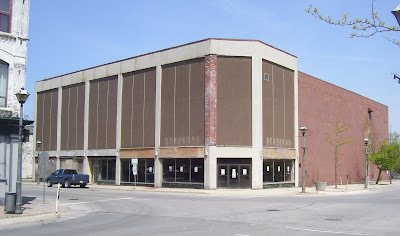 Above: Rosbergs Department Store, as seen on May 5, 2008, at the north-east corner of Queen St. And Erie Ave. Niagara Falls Ont. Building has been vacant for years. The tracks are no longer in place on Erie Ave. Note the same tilted tree at the right, still growing by the side of the building, along Queen St., thirty-one years later. Photo by R. Bobak
*
The Rosbergs building was destroyed by fire on Oct.4, 2009 - see more here
*
Posted by R.Bobak at 1:54 AM

Labels: Niagara Falls then and now, streetcars and trains