Niagara Falls Then and Now: Who owns Niagara's Horseshoe Falls? 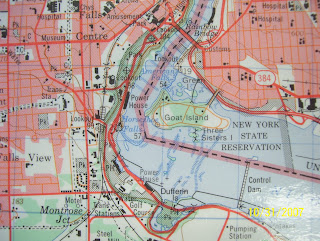 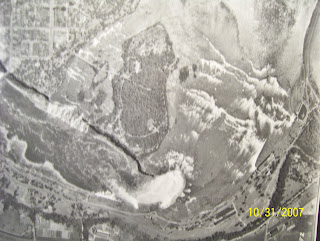 A recent Disney-produced tourism video for the U.S, gov't., which depicted a fleeting glimpse of Niagara’s Horseshoe Falls, sent both Canadians and Americans into fits of nationalistic frenzy. (click on map to enlarge)

The St. Catharines Standard (Oct. 29, 2007) ran an article headlined “Has U.S. annexed falls?”, which was credited to Matthew Lee of Associated Press. In the Standard’s version of this story, this paragraph appeared:
“In showing the natural wonder, Disney's filmmakers, however, chose the Horseshoe Falls, the only one of Niagara's three waterfalls to lie on the Canadian side of the border separating western New York state from southern Ontario.”

However, on the Associated Press website the same day, Matthew Lee’s original story was headlined “Video puts Canadian Part of Falls in US”, and the paragraph (which was later cited by the Standard) actually read:
“In showing the natural wonder, Disney's filmmakers, however, chose the Horseshoe Falls, the only one of Niagara's three waterfalls to lie almost entirely on the Canadian side of the border separating western New York state from southern Ontario province.”

Note the difference: the words “almost entirely” which were in Lee’s original AP article, were not included in the St. Catharines Standard’s article!!

Why is there a discrepancy between what is supposedly the same story by the same author?

I guess the St.Catharines Standard's editor omitted/deleted the phrase “almost entirely” out of the original story, to make it more sensational for Canadian nationalists to get indignant about. Is the Horseshoe Falls entirely, or almost entirely in Canada?

Lee also writes this curious passage: “The political boundary is not marked with a line through the Niagara River that divides the two countries and connects Lake Erie to Lake Ontario.”

What?! “Not marked”?! But, the “political boundary” IS marked with a line on maps, and has been since the Paris Treaty in 1783. What has changed? I spoke on Oct.30, 2007 to Kim Craitor, the Liberal MPP whose riding includes Niagara Falls, about this controversy, asking him where the border actually is along the Horseshoe Falls. He had no clue, telling me brusquely he hasn’t read the papers: “I’m just saying, whatever it was, it is.” Well, thanks for that typically Liberal useless non-answer.

Maps clearly show that the Canada-U.S. boundary runs approximately midcourse along the Niagara River - Grand Island is on the U.S. side, Navy Island is on the Canadian side, Goat Island is on the U.S. side. The boundary line along the upper Niagara River is clearly shown south-west of Goat Island. At the Horseshoe Falls it turns towards the north off Terrapin Point actually following the crest of the Falls in a straight line, then turns again to the north-east (now in the lower Niagara River), thereby encompassing a small part of the eastern edge of the Horseshoe Falls abutting Goat Island. Interestingly, the border, running straight, is shown paralleling the eastern edge of the Falls - it is at this unique point where the jagged crest of the Falls sometimes juts onto one side of the line, and at other points, recedes behind it. (Shown are an air view, and a map view, of Niagara Falls, showing the Horseshoe Falls and Goat Island, from Canada’s Energy, Mines and Resources. See also here)

Sources such as Wikipedia dubiously claim the Horseshoe Falls are “located entirely on the Canadian side of the border”. Others, such as Google Maps, show the Falls to be partially on the U.S. side. A U.S. geological survey put the Horseshoe Falls as one-third in U.S. territory. Back on Jun 23, 2006 Amy Sharaf wrote in the Leader-Post: “according to a map by the Ontario Ministry of Natural Resources, the Horseshoe Falls are entirely in Canada, except for a tiny sliver -- which would be about one per cent -- in the upper right-hand corner.”

Maps that I viewed at the Niagara Parks Commission's Oak Hall offices show that a small portion of the Horseshoe Falls which abutts Goat Island is on the U.S. side, yet other maps showed the border actually running through the tip of Terrapin Point, putting a slice of the point on the Canadian side! However, even on this map, due to the angle of the supposed border line, a small portion of the Horseshoe Falls is nevertheless still shown in U.S. territory.

The St. Catharines Standard (Oct.30, 2007) followed up with a quote from local historian Sherman Zavitz: “Geography is geography, and the Horseshoe Falls, with the exception of a couple of feet on the Goat Island side, is certainly in Canada”. Technically, though, a “couple of feet” does not mean all. In other words, most, but not all, of the Horseshoe Falls fall within Canada - they are shared. If so, then Zavitz has proven Wikipedia to be inaccurate. (Perhaps, the Standard’s headline should more appropriately ask: “Has Canada annexed Falls?”)

Not to be outdone in knee-jerk chest-pumping bravado, the Niagara Falls (Ontario) Review (Oct.30, 2007) printed a screaming front page, shouting out in oversized bold letters: “Dear Uncle Sam, These are OUR FALLS” (over a picture of the Horseshoe Falls, which also showed the edge of Goat Island); “YOURS look like this” (over a picture of the American and Bridal Veil Falls). Please - cry me a river. The Hamilton Spectator’s (Oct. 29, 2007) headline also yelled: “Oh no! U.S. grabs our Falls”. No, they didn’t. Get a grip. Disproportionate over-reaction, OR WHAT?!

Who could show that they were more put out, distressed, shocked and upset over the Horseshoes' several-second-cameo in this video?
- Americans: “This is not the United States,” thundered Niagara Falls (N.Y.) historian Paul Gromosiak (St. Catharines Standard Oct.29, 2007), “This is 100 percent Canada, shot from the Canadian side. This is an insult.”
- Or, Canadians: like Carolyn Bones, president of the Niagara Falls Chamber of Commerce, who also roared: “I believe this is an insult to Canada”. (Niagara Falls Review, Oct.30, 2007)
Oh, please! They should be glad for ANY publicity that would bring ANY tourists to Niagara, whether to their side or ours. By the way, here’s what the Buffalo News (Oct.30, 2007) reported, which the St. Catharines Standard didn’t: “Of some solace to Gromosiak: About 20 percent of the Horseshoe Falls, he estimated, lies in on the U.S. side of the border.”
The Toronto Star (Oct.30, 2007) quoted U.S. State Department spokesperson Sean McCormack: "This is a shared natural wonder between the United States and Canada, and we're very proud to have part of it in our territory, and I know the Canadian government is very proud to have part of it in its territory."
The Horseshoe Falls is a shared draw. Ontario’s Liberal Tourism Minister Jim Bradley, who gave up trying to convince Americans to visit, had Disney help do his job; at least, it cost us nothing! Tourism operators should take this video in stride, and use the opportunity to show a welcoming, inviting face to tourists, not a petty, parochial one. And as for the view, anyone who has been to the edge of Goat Island abutting the Horseshoe Falls, well knows that there is a spectacular view from there also.

The U.S. Geological Survey (official U.S. cartographer says one-third of Horseshoe Falls is in U.S. Interestingly, Canada refers to the Horseshoe Falls as the "Canadian Falls". Doesn't really matter. It is constantly receding and scientists say it will go back and forth. Canada should be happy the U.S. is not too concerned about the boundary.